Who is the best player in the NBA?

This is a question that you’re 90% likely to hear being discussed whenever tuning into big time sports networks such as ESPN and Fox Sports. And this topic has become the bread and butter for sports shows, simply because it’s a debate that will always engage NBA fans.

It’s weird to think about how sports debating became such a hot topic. Sports are very clear cut. There is a distinguished winner and loser after every game. What else is there to discuss? The problem for these sports networks is that if they just talked about who won and who lost, their segment would be over in five minutes. They still have another hour and 55 minutes in their two hour time slot! And this is why we always see sports networks pulling arguments out of their ass, creating hypothetical scenarios or attempting to pin NBA players against each other. As a result, we see these clown ass tv personalities such as Skip Bayless, Ryan Hollins, or Max Kellerman constantly discussing who the G.O.A.T is or who the MVP of the current season is. And they do this every single day, throughout the NBA season, and even in the offseason.

As stupid as this technique is, I have to admit that it works. And when I see someone like Skip Bayless say that Anthony Davis is the best player on the Lakers, just to spite LeBron, it definitely grabs my attention. These guys say ridiculous shit all the time just so they can get a reaction out of fans, and sometimes, even the players themselves.

Looking at this past season, a lot of ignorant statements were made by these “analysts” on tv. For example, Max Kellerman said that Kawhi is a better pressure player than Kobe. Stephen A. predicted the Raptors were going to get swept by the Bucks, and Skip Bayless… well Skip Bayless is a clown every day of the week.

Despite how idiotic these reporters can be, one thing that these sports networks have figured out is that there are certain debates or discussions that NBA fans will always want to chime in on. And it’s these discussion topics that lead to the most viewership.

With this tactic in mind, the “current best player” debate is one argument that will always get our attention as sports fans. And this is a debate that these “analysts” can always retreat to whenever they have nothing else to talk about. For these reporters, discussing the best NBA player is like office workers talking about the weather. It’s a conversation that you can always fall back on.

It’s kind of pathetic that we are always hearing this one argument. You would think that these reports would have more to talk about considering the NBA is the most entertaining sports league that there is. Players have highlight performances on a nightly basis, trade rumors are always buzzing, players are paying for abortions, etc. There’s a lot going on, and we never really run out of things to talk about in the NBA. Players do their thing on and off the court, and these analysts just talk about it.

Reflecting on this past season, reporters had a lot of game film to pull from, and it was pretty easy for shows like Undisputed and First Take to focus on the few players that were lighting up the league. We watched James Harden and Giannis dominate the NBA this season, so naturally that’s all we heard about from these sports networks.

For James Harden, he had another MVP-like season, which included a streak of scoring over 30 points for 32 games in a row. He carried the load for the Rockets, especially during the 24 game stretch when the Rockets were missing Chris Paul.

Giannis was another player who dominated throughout the season, averaging 28 points, 12 rebounds, and 6 assists. The Greek Freak was outstanding as he helped lead the Bucks to a 60 win season, which was the best record in the entire league.

Whenever tuning into one of these sports shows, the debate would be fully centered around Giannis or Harden, with sprinkles of Paul George here and there. One thing that many fans and analysts tend to do is focus their opinion around what is happening in the present moment. It’s all about RIGHT NOW and often times we see someone like Stephen A use a 5 game span to formulate an opinion.

In reality, we shouldn’t debate who deserves the MVP is until the end of the season. But of course, these analysts need something to fill that two hour time slot. As a result, we’re seeing Max Kellerman declare James Harden as the MVP… in February.

With all of the mid season and post season debate about who the best player is, it seemed as if the the entire league had forgotten about LeBron. After the playoffs finished, the best player discussion was centered around Giannis, Harden, and Kawhi Leonard.

If we’re having this discussion based on the 2018-2019 season, it makes sense that we would only talk about these three players. Giannis and Harden dominated the regular season. Meanwhile, Kawhi was the story of the playoffs, leading the Raptors to their first ever NBA title. Like I said, these sports networks are into CURRENT events and it’s crazy how we’re forgetting what LeBron did just one year ago.

Thinking back to the 2017-2018 regular season, everyone was talking about James Harden because of his outstanding numbers. But once the 2018 playoffs began, LeBron went into “Zero Dark Thirty” mode and showed people why he was still the best. Throughout the 2018 postseason, Bron had eight 40+ point games, hit two incredible buzzer beaters, and, more impressively, only got pissed at JR Smith one time. 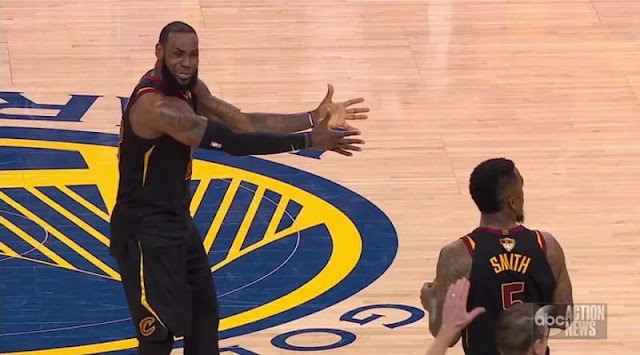 Just a year ago, after carrying the bum ass Cavs to the 2018 NBA Finals, we were praising LeBron, and saying he was on a whole different level from anyone else in the league. Now, after a disappointing 2018-2019 season with the Lakers, LeBron has faced a lot of criticism from these sports networks about “slowing down” due to his old age. There has also been criticism about LeBron just not being focused in LA. And the story of him leaving practice early to film Space Jam surely didn’t help his case.

Despite what analysts are saying, I think it’s ridiculous to count Bron out as one of the best players in this league. Yes, his first season with the Lakers was a disappointment, but a big part of that was due to injuries. The Lakers were fourth in the West until LeBron had his dick injury against Golden State, so clearly they would have been fine if LeBron was healthy. And with the new addition of Anthony Davis, I think this team will be a top contender in the Western Conference. And before people call me a Bronsexual, I will say that I don’t like everything about LeBron. Over the years I have become a pretty big fan of him as a player, and I still want him to be successful on the court. But ever since following him on different social media platforms, I’ve noticed that this man has a pretty huge ego. Whether he’s calling himself the best player ever or making the decision to film a new Space Jam movie… I can understand why people hate him.

He’s made some questionable moves, but we still can’t deny his greatness on the court. That’s why I’m hoping he can come out this season and remind us of why he is so special.