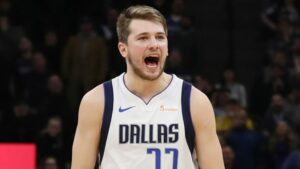 So Luka Doncic is pretty damn good at basketball. Not just good for a rookie, but good for an NBA player in general. People always want to know the stats, so I’ll give you the stats. Through 40 games this season, Doncic is averaging 19.8 points per game, 6.7 rebounds per game, and 4.9 assists per game. But alongside the impressive numbers, Luka has proved that he can perform in the clutch. Against the Trail Blazers on December 23rd, Luka hit one of the craziest shots I have ever seen at the end of regulation. Then on January 11th against the Timberwolves, we saw Luka hit a pull up go-ahead three pointer that put the Mavs ahead with 20 seconds left. This is a kid who has the so called “Mamba Mentality” where he is willing to take over a game when needed. And just like Kobe, Luka has incredible footwork. In fact, it’s Luka’s fluid movement that allows him to have one of the filthiest step backs in the game.

What’s more impressive is how Luka carries himself. In an interview with Chauncey Billups, Luka was asked, “What are your goals for the NBA?” And he responded saying, “I dream to be an NBA champion.” Not an all star, not an MVP, but a champion. This is the mindset that every young player should have. Luka has a true passion for the game along with exceptional talent. The perfect combination.

What’s even more amazing is that the man is only 19. Thinking back to when I was 19, I was interning as an office assistant at a credit union. Meanwhile, this guy is the face of an NBA franchise. Talk about a “What am I doing with my life?” moment. But anyway, the man is 19 and is currently second in all stars votes for the western conference frontcourt, trailing only Lebron James. To say that he has exceeded expectations would be an understatement.

With Luka’s success, it’s left a lot of people thinking, “How did the Suns or Hawks pass on this guy?” It’s similar to the 2007 draft where the Blazers selected Greg Oden over Kevin Durant. But of course, hindsight is 20/20 and it’s a lot easier to evaluate a team’s draft pick after we see the result. As Drake said in his most recent album, “Don’t tell me you knew it would be like this all along.” And although Drake is probably addressing his peers in this song, he could also be talking about NBA fans who try to roast franchises for making bad draft picks. Nobody knew that Doncic would make this much of an impact so early on. So it’s ridiculous for people to attack the Suns or the Hawks for passing on him.

When it comes to advocating for Luka, the only person who can really say “I told you so” is New York Knicks Center, Kristaps Porzingis. In an interview with Complex, KP was asked to compare Luka’s skill level to other guys in the draft. He responded saying, “There’s no college kid that would be able to put up those kinds of numbers at the highest levels in Europe, playing against professionals, grown men. And he’s so young with such confidence, it’s unbelievable.”

Keep in mind, this is coming from a guy who went through a very similar process as Luka. When the Knicks selected Porzingis as the 4th overall pick in the NBA Draft, people were more than upset. Because fans had never watched Porzingis play, they immediately questioned the Knicks organization for making such a pick. Even professional sports analysts like Stephen A. Smith completely underestimated the talent in the EuroLeague. Because Stephen A. never did his research on Porzingis, he criticized the Knicks for drafting him, which lead to the viral video of Stephen A. calling Porzingis a “project” that would take years to develop.

After watching Kristaps perform at such a high level in the NBA, you would think that we would have learned our lesson about underestimating EuroLeague players. Unfortunately, this isn’t the case as we made the same mistake when underestimating Luka’s talent.

Moving forward, hopefully we can give more respect to the EuroLeague and pay more attention to foreign players who have potential. This isn’t much to ask for NBA fans and it’s something that professional sports analysts should already be doing. Looking at you, Stephen A. Smith.

With that being said, whether you were on the Luka train beforehand or not, we can all appreciate his talent now that he is in the NBA. This is a guy who has “Future MVP” written all over him and the Mavs should be excited to have him as the new face of the franchise.

One thought on “How Did We Miss Luka Doncic?”