“Like if KD ruined the NBA”… “Retweet if you hate the Warriors”… “Too bad the Finals are already decided.”

These are the typical comments I read when scrolling through NBA posts on social media. And although they may be true, we have to admit that this NBA season has been the most exciting in the past few years.

Just last night, Lebron James passed Wilt Chamberlain on the all-time scoring list, scoring his 31,420th point at home against the Blazers. We are witnessing greatness, and what’s even crazier is that we are witnessing it in a Lakers uniform. (Can we say the Lakeshow is back ??)

With Bron out of the East for the first time in his career, there is now some uncertainty as to who will come out on top. Especially with Western all stars moving to the Eastern Conference. With Kawhi now on the Raptors, Jimmy Butler on the Sixers, and a healthy Kyrie/Hayward on the Celtics, the East has some serious firepower. It should be fun to see how this plays out.

Above all of these player changes, one of the more exciting stories this year has been the emergence of Derrick Rose. Pooh dropped 50 points the other night against the Jazz, following it up with one of the most emotional postgame interviews we have ever seen. Just a few nights later, D Rose hit 7 three-pointers in a losing effort to the Lakers. The man is certainly playing his heart out, and if he keeps this up, he might find himself in the All star game this season. 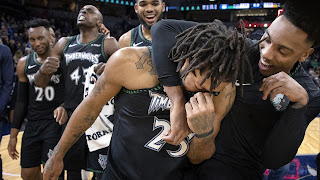 It’s not even December and we have already witnessed some incredible moments for the NBA. It will be great to see what the next 7 months have in store.