It was all good just a week ago.

Fast forward to Nov. 13, and the Golden State Warriors had the sports world buzzing after an argument ensued between forwards Kevin Durant and Draymond Green in a game against the Los Angeles Clippers. The argument was a result of a mishandled play at the end of regulation, where Green chose to dribble the ball up the court instead of passing to Durant. After turning the ball over, you could see Durant and guard Klay Thompson shaking their heads in disappointment while heading to the bench. 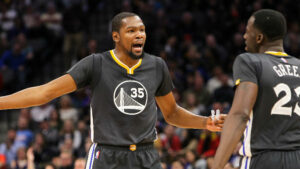 This is where the argument then started, as you could see KD and Draymond being separated right before taking the court for overtime. The disagreement, however, did not end here. After the game, the heated conversation carried its way into the locker room, where it was reported that Green said to Durant, “We don’t need you. We won without you. Leave.” (Chris Hayes ESPN). Those are pretty harsh words from someone who supposedly called to recruit KD right after the Warriors lost to the Cavs in the 2016 NBA Finals.

After all was said and done, the Warriors decided to suspend Draymond for one game. Seeing as Kevin Durant is arguably the Warriors’ best player, it makes sense for the organization to side with him in this situation. With Durant set to become a free agent this summer, the Warriors are doing everything in their power to make sure he re-signs to extend their championship window.

Draymond served his suspension on Tuesday against Atlanta, and it appears that everything is back to normal for Golden State. Now they can just hope for the glue of their team, guard Stephen Curry to recover as quickly as possible before an occurrence like this happens again.

Despite this incident being resolved, you have to wonder the long-term effect that this event will have on Durant and his impending free agency. He knows that players and fans around the league do not respect him for coming to the Warriors, but to have his OWN TEAMMATES criticize him is a whole different factor. It’s outrageous to hear that Draymond, and possibly other Warriors players, do not value Durant as a teammate.

For the NBA’s sake, it would be nice to see Durant move to another team. But at the end of the day, it is his decision to make, and we will have to wait for summer 2019 and his contract to expire to see what happens.