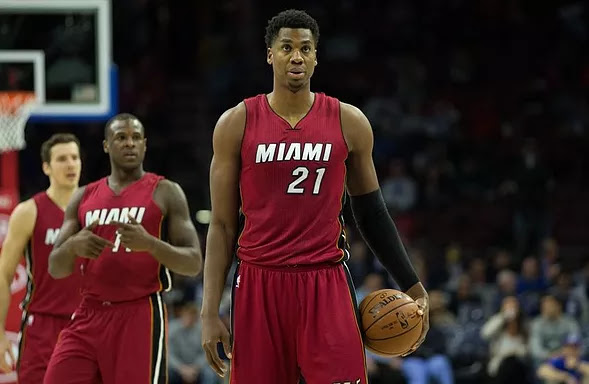 It’s crazy how much the average NBA player gets paid. You look at honest, hard-working Americans with professions that require years of hard-work and education and they’re earning a couple hundred thousand a year. Now looking at the average NBA player, someone like point guard Tyler Johnson, a player who doesn’t even start for his own team, is making $12.5MM a year. Players are making crazy money and a lot of the time they are able to earn millions without proving themselves. Take Joel Embiid for example. After playing just 31 games in 3 seasons, the Sixers signed Embiid to a $148MM contract with $84.2MM being guaranteed money.

This wage gap between professional athletes and ordinary citizens has been dramatic for a few decades now. However, even in the 1990s, the amount that players were making doesn’t compare to now. For example, Michael Jordan made $94 million throughout his 15 year career, barely more than $6MM a season. Arguably the greatest player of all time was only making half of what Tyler Johnson is being paid currently. The difference in pay for NBA players from older decades to now is due to the massive increase in TV deals and media sponsorships. The NBA has been able to sign with sports networks like ESPN and TNT, who combined pay $2.7 billion per year for the rights to carry games. As a result of ticket sales, jersey sales, and TV revenue, players are making much more today than ever before. In total, the NBA generates around $6 billion in revenue per year and with new expansions to the salary cap, around half of that annual revenue goes to the players.

As a result, average NBA players are now able to make nine-figure salaries on a yearly basis. We started to see these ridiculous salaries in the 2016 offseason where everyone was getting huge contracts. For example, Mike Conley became the highest paid player ever for a brief moment in time, getting paid $153MM for a five year contract with the Grizzlies. Some other crazy examples are players like Chandler Parsons and Timofey Mozgov getting paid four years/$94MM and four years/$64MM, respectively. To no surprise, neither of these players have lived up to their contracts.

There are way too many cases like Mozgov and Parsons where players who are somewhat good performers get paid and then completely fall off the wagon. Other examples include players like Ryan Anderson, Blake Griffin, Allen Crabbe, Evan Turner, Hassan Whiteside, Dwight Howard… the list goes on. And while it’s great that players are able to make this much money to provide for their families, it’s certainly frustrating for the fans and the organizations who’re paying these players.

While the level of play has certainly improved over the last few decades, it seems as if players’ passion for the game has decreased. Keep in mind this isn’t everybody, however there is certainly a handful of players whose main goal is to get paid.

In older decades, players weren’t even playing in the league as a means of making money. They had to work other jobs and were simply playing because they loved the game. Now we can see that this isn’t the case for everyone as there has been a trend in players performance declining after they receive a large contract. For example, Hassan Whiteside was terrible in the Heat’s playoff series against the Philadelphia 76ers. After the series was over, Tracy McGrady sat down with Byron Scott and Rachel Nichols and said, “it’s so disappointing to see a guy, in his contract year, he plays his butt off. But it’s like now, where is that fire? He’s relaxed. He’s too comfortable. I need to see that same fire before you got that contract.” Byron Scott then followed up saying, “Tracy, you’ve seen this in the league a thousand times. Guys get that contract and they fed and happy.” (Video can be seen below)

This obviously isn’t the case for every player, as there are stars like LeBron James, Stephen Curry and Kevin Durant who are getting paid hundreds of millions of dollars, but couldn’t care less about the money because their main focus is being the best. These players are stars for a reason. They care more about their legacy than any million dollar contract. This, however, isn’t the case for most players.

So, what should the NBA do about this? It can’t be easy for NBA owners, knowing that they’re investing millions in a player that will stop caring once he gets that money. How can general managers ensure that players will live up to their contracts? Should only All-Star level players be making millions? This issue leaves a lot of questions to be answered and certainly sparks a debate for why NBA players are earning so much.

Stay tuned for more content as our next article will discuss the wage difference between NBA and WNBA players.