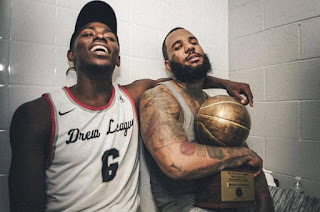 Around a month ago, some friends and I had the opportunity to attend a few basketball games at the Drew League in Compton, California. For those you who don’t know, the Drew League is a pro-am basketball league that has hosted some of the best NBA players in the world. Players like Kobe Bryant, Lebron James, Kevin Durant, and James Harden have all participated in games at one point or another.
To give some background on why we went, a friend of mine is a big Raptors fan, and there was rumor that Demar DeRozan would be playing in the final game of the day. With four games happening throughout the day, we made sure to show up during the first game, just to be sure that we would have a seat once DeRozan’s game came around. Coming into the day with zero expectations, I was blown away with the amount of talented players in each of the games that we witnessed. We saw crazy alley-oops, posterizations, and even some insane cross-overs. All from players that I had never heard of.
Despite all of the incredible highlights, the prime entertainment happened in the game right before DeRozan’s team came on. It was a battle between Denzel Valentine, who was a guest player for team “Redemption,” vs. Birdie’s Revenge, a team led by Frank “Nitty” Session, a player originally from Compton who has now won the league MVP for the past two seasons. I had never heard of Nitty before watching him at the Drew, but man was it great to watch him play. My explanation of Nitty’s performance won’t do him justice, so I recommend watching the video linked below.
After seeing the highlights, keep in mind that Denzel Valentine was an NBA lottery pick, and has showed some promise on a young Bulls team. That however, meant nothing to Frank Session. Nitty was locking Denzel up on defense and shooting over him on every possession. It was incredible to see. Not only is Session an absolute stud on the court, but he is also one of the more animated players in the league. Throughout the game, Nitty continued to let Denzel hear it, to the point where a fight almost broke out between the two. (Keep in mind this isn’t even why my friends and I went to watch the Drew league.) The game with Demar and Rudy Gay was entertaining, and the fact that my friend got a pic with Demar and his game-worn shoes made it pretty cool.
But the real treat was the discovery of Frank Session. Even with NBA All-Stars playing at their highest level, Frank was just as entertaining. After witnessing it in person, I had to do some research on this guy.
What’s most incredible is that Session didn’t start playing the game of basketball until he was 16 years old. With skating being his first passion, it took serious convincing from his friends in order for him to commit to playing basketball. What came of this was a discovery that Frank had much more natural talent than the average player. His talent earned him a starting spot on his high school team at Jordan High School in Long Beach, California. With so much athleticism, Frank went on to play basketball at several colleges. Of the 4 schools he attended, Weber State is the most notable where he played alongside current NBA all-star Damian Lillard and averaged 11.9 points and 6.2 rebounds. Nitty was a good player throughout college, but he got very unlucky with several injuries. After breaking his hand during a South Bay Lakers try out (The LA Lakers G League affiliate), Nitty had to step away from the game of basketball in order to provide for his family. As a result, Nitty spent the next few years working as a store manager at Sprint, but continued to play basketball as a hobby. It wasn’t until Game, the rapper from Compton who grew up with Nitty, eventually convinced him to come out to the Drew League and play for “Birdies Revenge”.

With Nitty being such a natural at the game of basketball, it wasn’t long before he started to make a name for himself for. Since joining Game’s team, Frank has now won the league MVP three years in a row and he led his team to a Drew League championship in 2017.

Nitty plays his heart out every game, and he could care less about who he’s going up against. Along with Denzel Valentine, Nitty has gone head-to-head with players like James Harden, Demar DeRozan and Rudy Gay. And he plays just as well as any of them. In fact, Damian Lillard has gone out and said that “Frank is the best player I have ever played with or against that is not in the NBA.” That’s some high praise, and it makes you wonder if Session would ever have a shot at playing in the league. With Nitty now playing in the National Basketball League of Canada, it will be interesting to see what the 29 year old can make of his career.
With stories like Frank’s, it’s crazy to see how some of these great players slip through the cracks and don’t quite make it to where they should be. After seeing players like Andre Ingram and Frank Session, it’s evident that the path to the league is quite a crapshoot, and there are many talented players who deserve a spot in the NBA.